Yale’s Clay-Based Robot Can Morph into Any Shape

Yale University has created a prototype of a shape-shifting robot, built from clay.
Aug 23rd, 2019 11:30am by Kimberley Mok 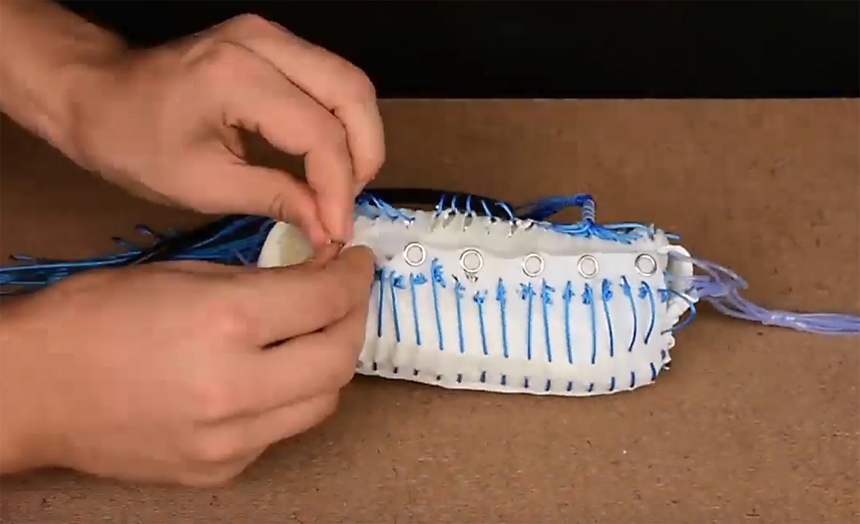 While many of us still harbor the stereotype of the robot made out of all-metal parts, a number of new experimental innovations is slowly but surely changing our long-held ideas about these machines. We’ve so far witnessed robots with melting “shape-morphing” joints, soft robots built with either microfluidic circuitry or self-healing materials, as well as symbiotic robot-plant hybrids that are half-plant, half-robot. Things are now getting to a new level of weird with Yale researchers recently unveiling a shapeshifting concept robot that is made out of… clay. Watch to see how it works:

As the researchers note in their paper, their clay-based robot was inspired by the art of sculpture, where a malleable material is molded by hand into any desired shape. Having already tested out materials like foam, and structural principles and tensegrity for building a morphing robot, the researchers ultimately decided to study clay as a possible energy-efficient source material, as it doesn’t require additional force to keep its form once it’s been molded into shape. What the researchers needed then was a robotic sculptor of sorts — a sculptor in a robotic skin that could “sculpt” the clay into whatever figure was needed.

For the time being, it’s a pretty simple morphing robot, but it is able to perform the major task of getting itself over an obstacle. To accomplish this feat, the team first set out to find the best malleable material that would function as their “clay.” After testing out a variety of oil-, water- and sand-based clays, the group settled on a water-based material from Crayola called Model Magic, which required the least energy to deform, pointing out also that: “Model Magic was easiest to work with for logistical reasons (did not stick to fabric, and exhibited a slight spring-back effect).”

Now, the team had to figure out how to build a skin that would not only shape its clay innards, but also move it around. So they decided to construct their skin as two layers: a “morphing skin” that would mechanically squish the clay into almost any shape; and a “locomotion skin” that will propel it around. These two are layered on top of each other, and then wrapped and secured around a mass of clay material. 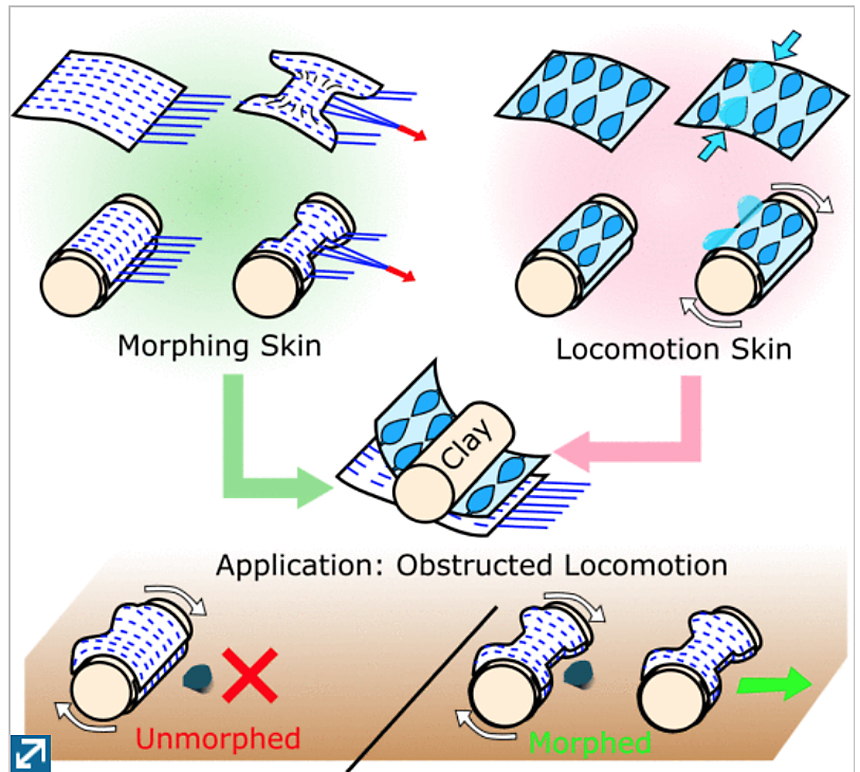 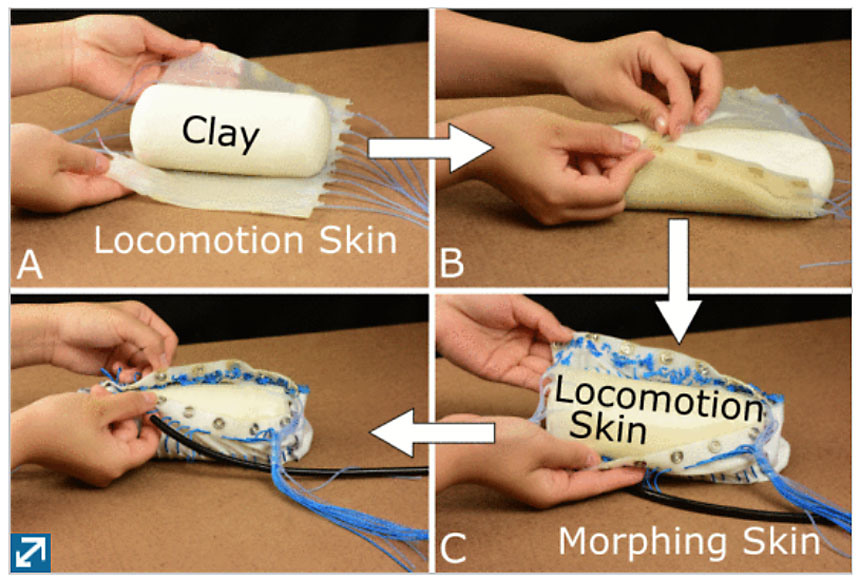 The clay material is wrapped first in a “locomotion skin,” then a “morphing skin”. 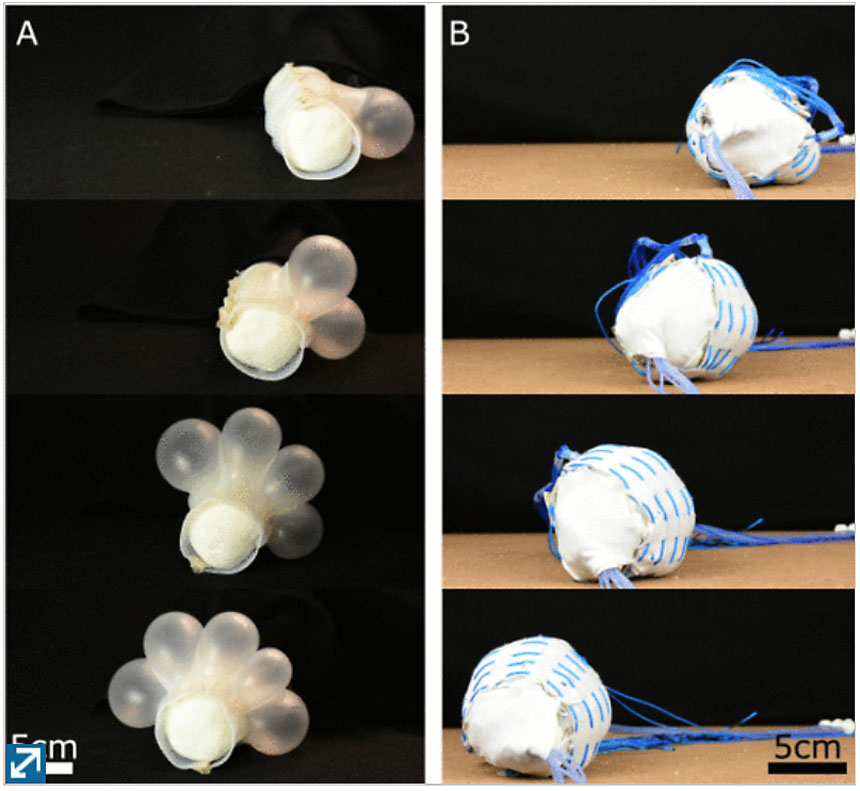 The locomotion skin is the first, underlying layer, and consists of two rows of pneumatic bladders fabricated into a silicone elastomer film, which functions as actuators when they are inflated with air. When programmed to inflate one after the other, it creates a rolling motion that gradually moves the hunk of clay forward or backward.

On top of the locomotion skin is the morphing skin, which is made out of cables that are bundled into rows of stiff tubing, sewn over a stretchy fabric. The team also experimented with varying the density of the stitching. When the robot needed to change shape, the cables of the morphing skin were pulled via a spooling motor. This design of combining the cable bundles — sheathed in stiff tubing — is similar to how bicycle braking systems function. As these cables contract, they produce the force needed to mold the clay, while the fabric keeps the clay from oozing out of the network of cables. 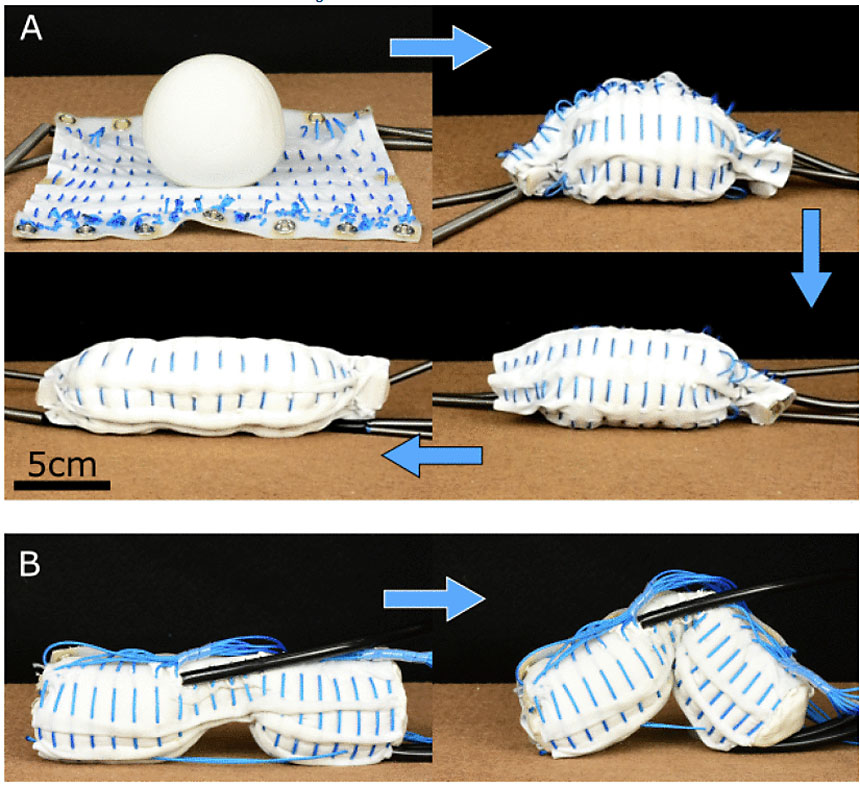 Additionally, the team explained that “to maximize the range of attainable shapes, the morphing skin is used as the outermost layer. This arrangement has other benefits: it prevents interaction between the cables and clay, it prevents the clay from drying out, the locomotion skin promotes uniform morphing between cables, and the morphing skin prevents the locomotion skin’s bladders from over-inflating.” As one can see, the robot’s design does allow it to successfully transform itself in order to maneuver over a rock. The team is now putting its efforts in developing a spherical robot that can flatten itself, and then move up a hill using an inchworm-like movement.

Granted, this prototype looks rather rudimentary for a robot, but one can imagine what fascinating possibilities of seamless morphing might arise once a wirelessly powered and (perhaps telepathically?) controlled version of this is finally developed — potentially one made with a self-healing material. As the team notes, such self-morphing robots would be invaluable in search-and-rescue missions where it can shapeshift to squeeze into odd nooks and crannies, or in situations where resources are rare, and the same bit of material would need to be infinitely adaptable and transformable on-demand in order to suit the needs of the moment. As a wider range of robot designs emerge, we can expect to see more unconventional schemes such as this versatile bot made out of malleable materials.

SHARE THIS STORY
RELATED STORIES
Livin’ Kubernetes on the (Immutable) Edge with Kairos Project 4 Supply Chain Security Threats and How to Handle Them What Is Edge Computing? Edge Computing vs. Cloud Computing What Is Multi-Access Edge Computing?
SHARE THIS STORY
RELATED STORIES
9 Supply Chain Security Best Practices Spotify: Bigger the Codebase, the More Challenging the Migration What Is Mobile Edge Computing? Performance Measured: How Good Is Your WebAssembly? Top Edge Computing Companies to Know
THE NEW STACK UPDATE A newsletter digest of the week’s most important stories & analyses.
The New stack does not sell your information or share it with unaffiliated third parties. By continuing, you agree to our Terms of Use and Privacy Policy.