ZetaChain is proposing a new public L1 blockchain that is designed to agnostically connect other blockchains together.
Mar 10th, 2022 8:45am by Jake Ludington

One fundamental challenge for decentralized application (dApp) development is the fact that individual blockchains are not interoperable by design. If you want to release an application that spans blockchains or leverages features that are only available on another blockchain, the standard workaround has been to wrap tokens and leverage a bridge-like wormhole to pass the value of those tokens between the two distinct blockchains. Depending on the relative market cap of the two blockchains and the number of wrapped tokens involved, these bridges have created desirable attack vectors for bad actors looking to exploit security shortcomings, which I covered in more detail in a previous article.

When it comes to engaging with multiple blockchains, one common approach to dApp development is to build an app for each chain. This has the potential to become fairly impractical to maintain, particularly as the number of heavily used blockchains continues to grow. ZetaChain proposes that app developers can create a single “omnichain” app that interfaces with all other blockchains via ZetaChain. The diagram below, from the whitepaper, provides an example of what this might look like. 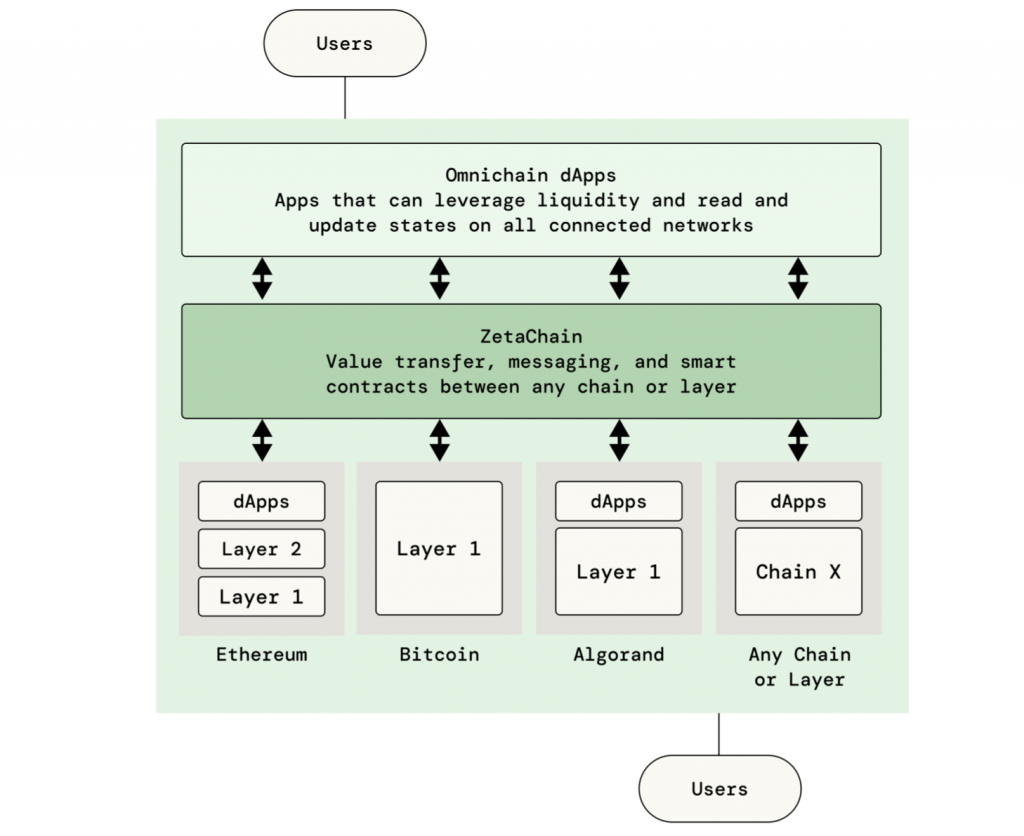 In an interview with The New Stack, where the ZetaChain contributors requested to remain anonymous, one of the lead contributors said, “With this new paradigm, there might be a world where you deploy a smart contract on ZetaChain and then it works across all chains, so an app developer doesn’t have to deploy a dApp on Ethereum, Polygon, and Solana. You can leverage liquidity on all the connected chains — we act as a metalayer.”

The general idea is that instead of needing to deploy a dApp and accompanying smart contracts on each chain, you add some additional functions to your existing smart contract and ZetaChain unlocks functionality that they’re referring to as an omnichain-dApp (odApp).

How Is This Different from Cosmos?

In speaking with the team from ZetaChain, one of the lead contributors explained, “If you want to be part of the Cosmos ecosystem, you have to speak IBC,” which is its inter-blockchain communication protocol. The ZetaChains representative further explained that “ZetaChain can support any smart contract blockchain. We also enable support for non-smart contract chains like Bitcoin, Dogecoin, [and] Litecoin using Threshold Signature Scheme (TSS).”

Theoretically, ZetaChain addresses one of the core issues that plagues bridging, by eliminating stored value being tied up in wrapped currency that can fall victim to infinite minting scams, like the $300 million Wormhole exploit that managed to draw attention even in the mainstream financial press like CNBC. There is no wrapped currency waiting to be stolen in the ZetaChain approach.

They also seem to have thought through the risk of 51% attacks (explained in more detail in the shared security article linked above) and have a smart contract in place that controls ZetaChain supply.

What’s less clear is how ZetaChain is going to build trust in its model of acting as an intermediary. In their model, you need to trust the blockchain you built your dApp on, the blockchain you’re connecting to, and ZetaChain as the layer in the middle that’s making it possible.

When I was originally asked to keep the ZetaChain team anonymous, my initial reaction was that they must be up to something unscrupulous. Having met them, I no longer suspect that’s the case and they seem to have other reasons for remaining behind the scenes. It also lends some credibility that they’ve received funding from some key players behind Coinbase and Binance. I do think this is one of those areas where decision-makers who are building in Web3 are going to need a paradigm shift in thinking, since most of us want to know who is behind the technology we spend our IT budgets on.