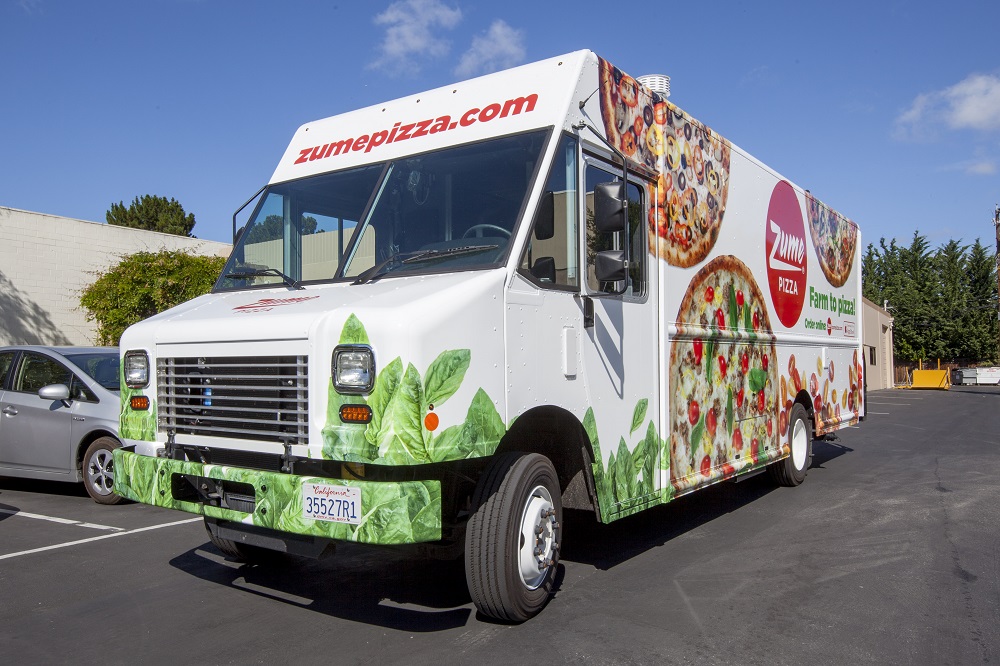 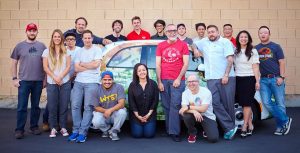 An ambitious Silicon Valley startup is using automation to improve food delivery — and it’s starting with some tasty and innovative pizza. The company has also given some serious thought to the role of humans in our automation-assisted world — not to mention improvements in how we get our food.

Alex Garden has a background in video games: He’s the former president of Zynga Studios and was general manager of Microsoft’s Xbox Live. In June of 2015, he launched his food-delivery startup Zume in “stealth mood,” building trucks in an unmarked Silicon Valley garage, according to a report from Bloomberg. By October, the company had lined up a crew of engineers — mechanical, electrical, and software — to work with a Swiss robotics company ABB. Zume’s in-house tinkerers built whatever they needed — everything from circuit boards to their specially-designed boxes with sogginess-preventing divots, manufactured from sugar cane fibers.

Eventually, it all came together. Zume’s (patented) delivery trucks each have 56 ovens, which can each be fired up remotely. Zume’s trucks are even equipped with software that crunches traffic data to calculate their estimated arrival time (with machine-learning algorithms). It’s GPS equipped, meaning customers can also track their pizza’s location in real-time.

Last April, according to Bloomberg, “the startup sold its first cyborg-constructed pie to an unsuspecting customer in Mountain View.” By January the company was selling 200 pizzas a day, according to Quartz, which adds that “even during the lunch rush there are more programmers working than kitchen staff.” Fast Company Design calls the system “complete overkill” for the small number of pizzas sold, but this year Zume hopes to scale up to 2,500 pies a day by expanding into the Bay Area, and eventually, Los Angeles.

Part of Garden’s vision is that all this technology can improve the pizza’s taste. Julia Collins is the company’s Chief Executive Officer — and its other co-founder — and last September she pointed out to Eater.com that “The major difference between the pizza you get at a pizzeria and delivery pizza is dwell time,” which is to say the time your fresh pizza “dwells” in a cardboard box being driven around town. 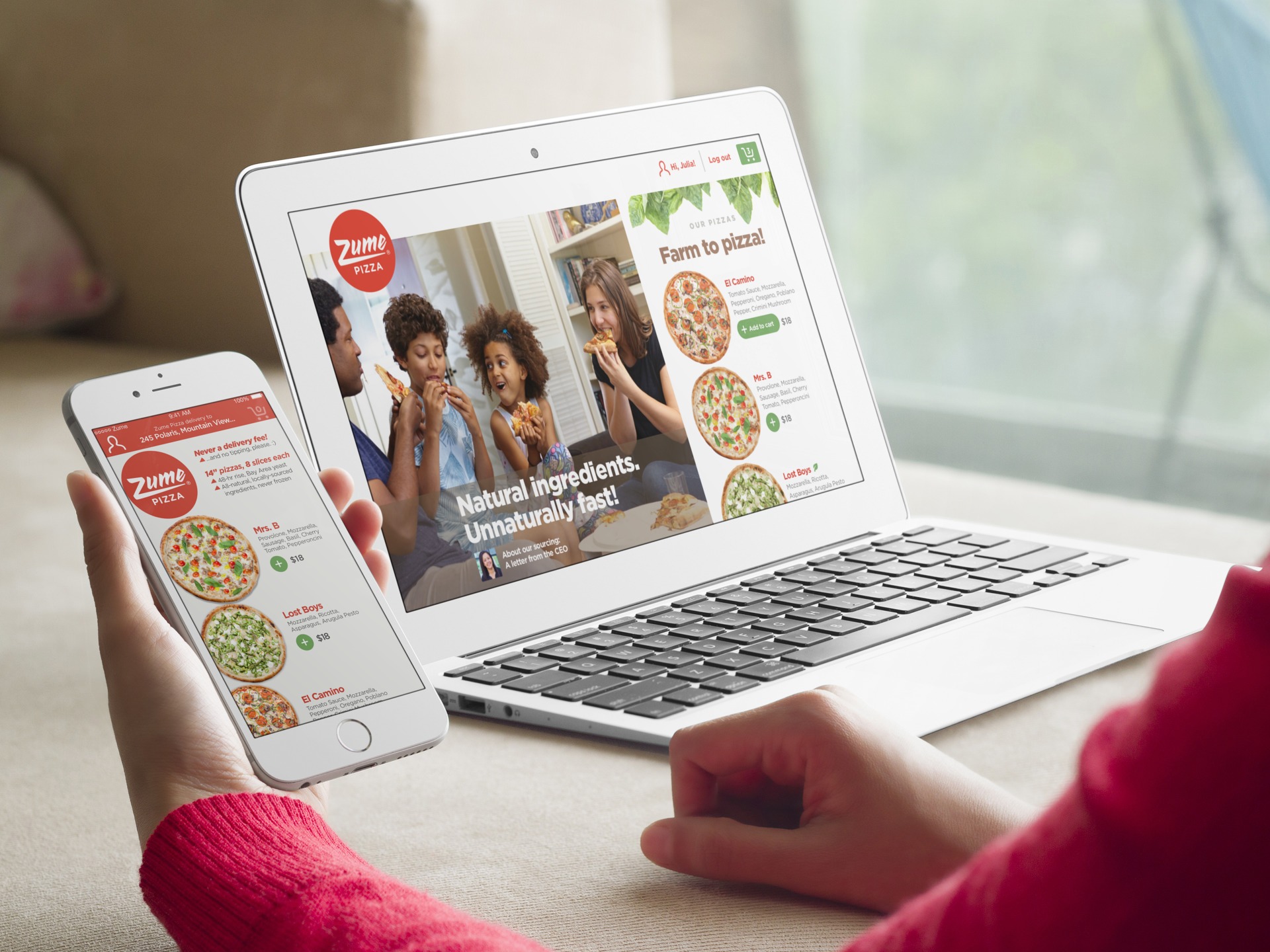 Garden told Bloomberg that the company’s ultimate goal is to become “the Amazon of food.” (And not, CEO Collins later told FastCo Design, the “Uber of pizza”.) One of the most significant things about Zume is it has also patented the actual process of cooking food en route. In a video interview with Bloomberg, Garden explained that you could just as easily have robots whipping up frozen yogurt or salads — making last-minute deliveries to your picnic in the park. The company is already working on a robot that can deliver fermented Kombucha and other “craft carbonated beverages,” according to FastCo Design.

But here’s where it gets interesting.

The company is aware that they’re saving money by displacing humans “Just imagine Domino’s without the labor component,” Garden told Bloomberg in 2016. It’s something more and more companies are now considering. Bloomberg pointed out that Pizza Hut is also experimenting with a robot named Pepper to handle some cashier duties in Asia, while Domino’s has already begun testing an autonomous delivery vehicle in Australia.

Zume is already spending less than 14 percent of its earnings on payroll and benefits, Quartz reports. This is less than half of what labor is costing Domino’s (30 percent) and McDonald’s (26 percent). And soon it’ll also automate away more human jobs, like pressing the dough into a circle and sprinkling the toppings over the pizzas, according to Quartz, which writes that “Eventually, Zume will only need humans to develop recipes and prepare fresh ingredients.”

But at the same time, last September Collins stressed to Eater.com that “you have to decide what your responsibility as the business operator is, and we’ve decided human beings and jobs are sacred.” The company pays above minimum wage — between $15 and $18 an hour, while offering free health benefits (including vision and dental plans) — and offered its current employees shares in the company, thereby reducing employee turnover to almost nothing. Quartz reports that Zume will even pay part of the tuition if employees want to take job-related tasks.

Ironically, right now Zume is hiring. They’re looking for a senior software engineer, a systems engineer, an Android developer and UI engineer, plus designers for user interface design and marketing graphics, according to its site, which lists nine different positions. But of course, they’re still in startup mode — though the company still envisions roles for humans as the company expands. 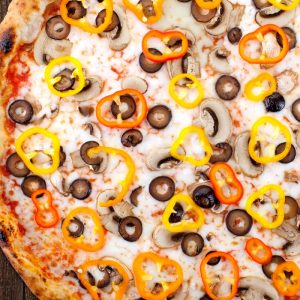 It’s being described as “co-botting” — robots collaborating with humans, who Collins says will be saved for “creative things that humans need to do, like tasting, designing, quality control” She elaborated a bit more for FastCo Design: “Humans cut veggies, make sauce, they create the pizza, they write the software. There are so many creative endeavors that are human-led and always will be. But there are other things we do that are perfect for robots. Pulling 2,000 pizzas in and out of an 800-degree oven a day? Perfect for a robot.”

Collins emphasizes that the company is not planning for self-driving vehicles or a fully automated system.

Quartz believes companies like Zume “provide an important modern example of how automation can impact employment in ways that aren’t immediately apparent, or necessarily negative.”

In the case of Zume, the tomatoes that are used in the sauce are all grown organically, and they’re also sourced locally. It may be more expensive, but it’s made possible by the lower costs of labor. “Zume’s hope is that, as it and other automation-aided restaurants buy more ingredients locally, more such farms will open, hiring more people.”

SHARE THIS STORY
RELATED STORIES
How We Manage Incident Response at Honeycomb It Happened to Me: How I Suddenly Owed AWS $13,000... Platform Engineering Won’t Kill the DevOps Star CES 2023: Robots, Astronauts, Schwarzenegger and Flying Cars A Brief DevOps History: The Road to CI/CD
SHARE THIS STORY
RELATED STORIES
Wellspring of Creativity: Why Public Domain Matters Tech Works: How Can We Break Our Obsession with Meetings? Linux Foundation Study Assesses 'Outsized' U.S. Influence on Open Source It Happened to Me: How I Suddenly Owed AWS $13,000... Watch Out, Attackers Have Their Heads in Your Cloud!
THE NEW STACK UPDATE A newsletter digest of the week’s most important stories & analyses.
The New stack does not sell your information or share it with unaffiliated third parties. By continuing, you agree to our Terms of Use and Privacy Policy.